Halloween, or to use it’s pagan name Samhain, has been considered a special time spiritually for thousands of years. These days we know it as an evening where children go out in fancy dress and go trick or treating, but it’s origins are far more interesting.

In Pagan, Halloween is known as the Feast of the Dead. Traditionally a time when those who have passed over are not only remembered but are welcomed back. This is made possible when the Veil between the Worlds, the barrier between the living world and the spiritual dimension, becomes thinner and contact with the other side is possible.

People can get together on this night and have rituals so they all make powerful energies and can reach out to the ones in spirit.

What do Pagans do on Halloween?

Ancient pagan celebrations include a ritual bonfire. They believe they have to extinguish every light in their home and relight them with fire from the bonfire. They also use the bonfire as a way of cleansing and protecting themselves for the next year.

They also honour their deceased ancestors and can bake special loaves leaving offerings to the spirits outside their homes. The third is set aside for ancestors and protecting spirits and rituals honouring the Dead.

On a lighter note, get your witch on with the Halloween rituals there’s something in the air at Halloween. A sense of old enchantments running. Deep magic is rife.

Just to finish, did you know that carving a jack-o-lantern comes from Ireland? However pumpkins weren’t used originally as they don’t come from ireland. They use turnips instead!!

Photo credit by Pexels on Pixabay 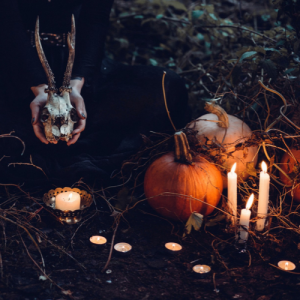